This page details one or more prototype versions of Sonic Spinball (Genesis).

A late prototype of Sonic Spinball from August 1993, originally found on a Chinese website.

The game is mostly complete and can be played all the way through, but there are several minor (and not so minor) differences here and there and an atrocious amount of bugs, especially in the latter half of the game and in the bonus stages. 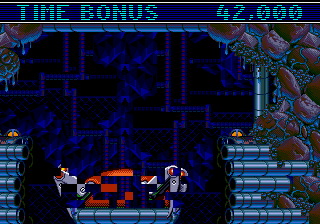 No sparkle sound effect is played during the SEGA screen. The propeller sound is also different.

The title screen has a number of differences:

Sonic's sprites when collecting an emerald were slightly touched up for the final game. The animation itself is 2 frames longer, for whatever it's worth.

The animation of Sonic hanging on a switch is not much of an animation at this point.

The animals that pop out of badniks are completely different.

The palette used for the other trapped characters is also obviously wrong in the prototype. Black and brown were switched around in the final palette.

The mountain background shared between cutscenes is much more red than what's in the final game. The cloud palette is also a light pink instead of purple.

An unfinished ending sequence is present in the game. To view it, activate Pro Action Replay code FF3947:0007 in the last level to force the end of ball scoring to appear.

The camera doesn't pan when it displays the HOW ABOUT A RIDE? message.

The destruction effect after beating Scorpius removes 8x8 tiles rather than 16x16 chunks. As a result, the boss appears to be mostly intact.

The layer of sludge around the bucket was redrawn and animated. 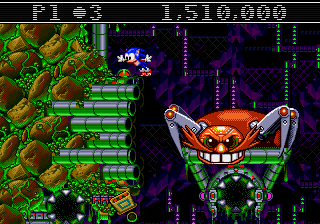 The palette can glitch up during the boss, causing green and/or red lines to improperly appear on the background. 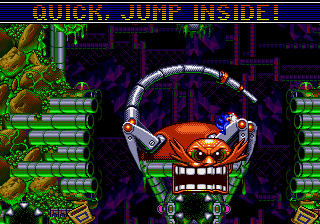 If Scorpius' head moves as it gets damaged, the jaw just kind of separates from the rest of the head. 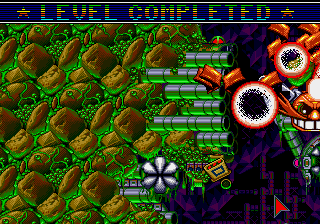 It's possible to finish off Scorpius with the falling rocks. Because of this, with enough precision, it's possible to hit the last trigger and enter the sewer warp at the same time.

The level with no unique score. 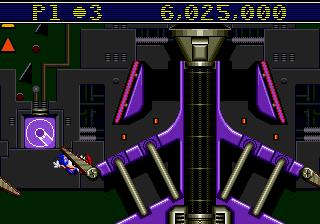 The flippers are inexplicably bugged in this stage and this stage only. Button A actually activates both flippers even though only the left one is shown playing the animation. The same goes in reverse: button B plays the correct animation for the right flipper but the flipper collison doesn't change. For example, Sonic will pass right through the flipper whenever the ball is trapped with the B button, as seen in the screenshot at the right.

Holding either A or C before holding B will obviously prevent this bug from happening, though bizzarely it will continue to work even after one of the working buttons is released. Just don't release B, that is.

Entering a rotating cell does not award its Chaos Emerald as soon as you enter it. This can cause Sonic to exit the rotating cell through the closed off path.

Many, many subtle differences.

The palette of this level changes at different points. Generally speaking, in the final version the background color fades to black more quickly as you move upwards.

The badniks preventing you to go through the ramps display a different message.

Their behaviour is also different. In the prototype, the badniks are completely invincible until all emeralds are collected. After collecting them they just disappear. In the final game, this was changed to the standard "disappear and then respawn" already seen in Lava Powerhouse; and the requirement to permanently destroy them was changed to "destroy all the blocks from the board they are in".

The way the badniks are erased in the prototype is also kind of glitchy. The jets of the disappeared badniks sometimes tend to stick to the screen for the remainder of the level.

Hitting a block only displays a status message, which is also colored differently.

The message shown after destroying a block was lengthened.

Different messages are used when falling through bars.

Also note that while no 'SCORE' tag appears on contact, points are still awarded for destroying them. Oh, and hitting the bars doesn't play any sound effect.

An easy to hit badnik was added to the final version to explain that "Robotnik is getting away".

A badnik was removed from the platform shaft. 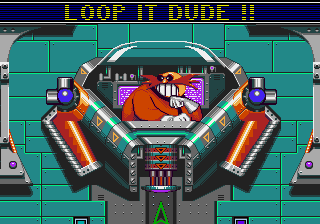 This was changed in the final version to randomized nondescript messages (with the exception of the infamous SMELL MY SOCKS) and the animation was removed, making the boss a frustrating trial and error experience if you don't know the trick to it.

Note that the correct amount of times to hit the trigger hasn't changed.

It's possible to interact with hidden flippers before they are activated.

To play the other ones, use Pro Action Replay code FF3949:00?? to change the bonus stage ID:

Most of the unique sound effects are missing.

With the exception of BALL 1, the strings for these messages do exist in the Prototype ROM.

Both the palette fade-in and fade-out are broken for all the bonus stages. This is just an example.

Returning from a bonus stage doesn't preserve the level palette changes. For example, Toxic Caves stays blue even at higher points in the map. Triggering another palette change fixes this.

The only stage normally available -and the first one by ID-.

The color of the board changed. Expect to see this other two times.

What suspiciously look like a Chaos Emerald is shown floating over the remains of the boss after busting all four teeth.

The most incomplete of the bunch.

The color of the board changed drastically here. The sprites are also affected to various degrees, as in the prototype some are definitely not colored right. 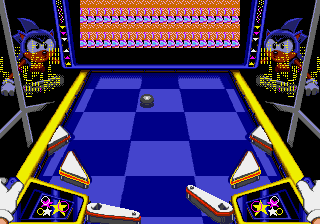 What this means is that if you do manage to defeat Robotnik without freezing the game, you are stuck forever with a blank board. 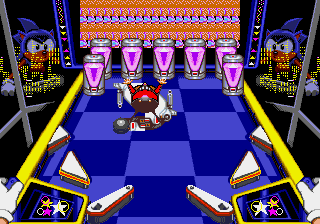 The usual change of palette. Notice how the prison's button is miscolored in the prototype.

A counter meant for to show up during the end of ball scoring summary. Not actually implemented though.

Various unused messages meant for the bonus stages. Some would be used in the final game.

The name and objective of the bonus games aren't shown yet.

Within the prototype, there are two unused music tracks that don't exist within the final game.

An unused variation of the intro music in this prototype. Although this version is longer than the used one, it's still not as long as the theme used in the final game.

A (really long) unused theme, thought to be intended for The Machine, mainly because it sounds similar to The Machine's theme in the final game, but also because The Machine re-uses The Showdown's music in this prototype.