Sonic 3 & Knuckles is what happens when Sonic the Hedgehog 3 is inserted into Sonic & Knuckles by way of the "Lock-On" feature, creating the full third title of the Sonic series.

Sonic 3 & Knuckles' level select is performed similarly to that of Sonic & Knuckles: grab one of the rope swings in Angel Island Zone and press Left, Left, Left, Right, Right, Right, Up, Up, Up (or use the PAR code FFFFE0:0101). After the ring sound plays, press Start then A to return to the title screen.

At the title screen, "Sound Test" will be available below "Competition". This will open up the level select menu (with a sound test at the bottom-right). Press C on this menu to change your character (00 is Sonic & Tails, 01 is Sonic, 02 is Tails, and 03 is Knuckles).

When this code is enabled, you can perform three actions while the game is paused: 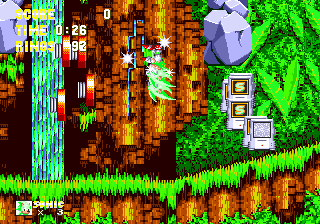 Debug Mode is unlocked by entering Mushroom Hill Zone and grabbing one of the lifts, followed by pressing Left, Left, Left, Right, Right, Right, Up, Up, Up (or use the Patch Code FFFFE2:0101). After the ring sound plays, go into the level select and hold A while selecting a level.

It is worth noting that the eighth Special Stage from Sonic 3 has a different palette in this game than it does in Sonic 3.

Interestingly enough, these zones returned in Sonic Mania as Bonus Stages, and Sonic 3 8th Special Stage has some Blue Spheres replaced with rings, making it possible to get perfect

A button of unknown purpose. It can be placed in either Act of Carnival Night Zone via debug mode, but it doesn't seem to do anything. This remains unused from Sonic 3 alone.

A glowing block that can be placed in either Act of IceCap Zone via debug mode. Jumping on it destroys it like the ice blocks. This remains unused from Sonic 3 alone.

Some strange platform that isn't placed in any level, but the graphics fit perfectly with Launch Base Zone. It has no movement on its own when placed, and needs specific Pro Action Replay codes to do so. To enable it, use the PAR code 1EFC52:1200 and it will replace the first ring monitor in Act 1. From there, enter FFF7E0:00FF to make it move down, and FFF7E0:0000 to make it return to its original position.

These songs can be heard in the Level Select/Sound Test.

Even when locked on with Sonic 3, some sounds still go unused.