Sonic 1 on a mobile phone before the iPhone port. Originally released through the Japan-only Sonic Cafe service (for I-Mode devices) and later given an inferior port to J2ME which was then provided as one full game or in two parts depending on the carrier.

It seems this version served as the basis for the Game Boy Advance port, Sonic the Hedgehog Genesis, which is generally considered to be the worst port of Sonic 1.

This UFO was used in the Genesis original's prototype build in Marble Zone while the final build deleted the sprite. So why is it here...?

Leftover graphics from the removed Special Stage remain in the data. 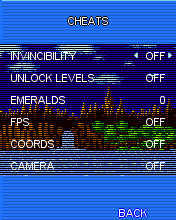 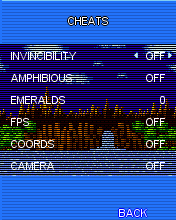 blkcol.blt is a piece of collision data, stored in its "raw" bitmap-like format, before it was converted to being stored in rows via an unused function.

There was a second release of the game for Verizon phones that strangely removed all of the sound effects.