A prototype of Sonic the Hedgehog was released by Hidden Palace at Midnight GMT on January 1, 2021. It shows the game in mid-development. Many stages cannot be completed due to the lack of signposts and bosses; some (like Clock Work Zone Act 3 and Final Zone) haven't been started at all, or are obvious placeholder designs (like the Special Stage).

Playing this build reveals a game that was originally tuned more for traditional platforming and exploration, rather than for speed, which eventually became the hallmark of the Sonic series. It also features a plethora of cut content that was previously only seen in grainy magazine screenshots and blurry video footage, like the giant rolling ball in Green Hill Zone, the UFOs in Marble Zone, and Spring Yard Zone when it was still Sparkling Zone. Also, Splats the Bunny!

A Sonic 1 prototype was sought after for 15 years, during which time prototypes of all the other 16-bit Sonic games were eventually found, until one was finally dumped in late 2020 by Buckaroo. According to drx, this proto was confirmed to be sourced from a UK magazine at the time.

However, the "Act 4" stage ID (03) is also functioning, to varying degrees. Most other levels either contain nothing or an object layout from the first act of that stage. Notably, Green Hill's "Act 4" slot contains a complete duplicate of Act 3, heavily implying it was once considered for the ending cutscene before being moved to its own level slot.

There is only one Special Stage in this prototype, with a very simple and unexciting layout implying that it's only a temporary design.

The prototype lacks a bespoke ROM header and instead contains boilerplate information, such as a date stamp of 1989.JAN, implying that this build was somehow compiled before development had even begun. A reasonable estimation, based on visual cross-checking against UK prerelease coverage of Sonic, places this prototype around March 1991.

Instead of the well-known "Sega!" logo and iconic chant, this prototype uses the standard (and silent) palette-cycling Sega logo which opens most other Genesis/Mega Drive games. Unlike in the final game, the logo can be skipped with the Start button.

The title screen immediately follows; there is no SONIC TEAM PRESENTS card.

The prototype's title screen lacks a trademark (™) symbol, and features a PRESS START BUTTON legend missing from the final game; well, it is technically still in the final, but the developers accidentally dummied-out the message due to not clearing the "SONIC TEAM PRESENTS" screen (both objects use the same memory space).

The demos are clearly from an earlier build, as Sonic dies almost immediately by running into enemies with no player interaction needed. The Special Stage demo also plays in between every stage, rather than being played only at the end of the demo order in the final release.

While the demo cycle only shows Acts 1 of Green Hill Zone, Marble Zone, and Sparkling Zone, a demo of Star Light Zone Act 1 is present. It's not normally seen due to the demo cycle having a total of 12 entries, but the demo player code forcing a loop after the sixth. It's just as broken as the used demos, however.

The list of objects by offset can be found at ROM address $8580. There are 94 objects in this build, well below the final's 140.

Located at 0x729CA is an unreferenced object position list that is presumably used for Sparkling Zone Act 1. Loading it in-game shows a number of differences, including Crabmeats near the entrance which are spawned on top of each other. To load, open the ROM in a hex editor and at 0x70040, replace 2460 with 29CA. You'll then be able to see the changes in SZ1. Interestingly, the object positions seem to match up with an early Sparkling Zone layout seen in screenshots of the pre-CES and CES-like builds.

Located after Labyrinth Zone's palette is an unused 4-line palette. It seems to have been intended for the Green Hill Zone tileset, as it fits extraordinarily well with only minor palette errors around rocks and such. This palette may be for an earlier version of GHZ, however, despite common belief, Green Hill Zone was not set at night originally, not even in the Tokyo Toy Show prototype (the low quality screenshots of that prototype make it appear that it was set at night), meaning that the reason the palette appears dark in this prototype's and the final's GHZ is simply due to level art colouring switching taking place sometime in development and not for a planned "Night Hill". 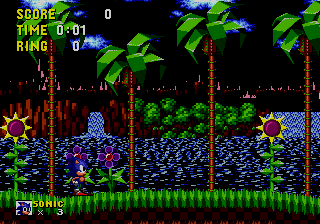 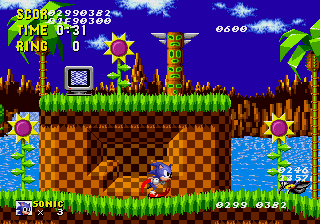 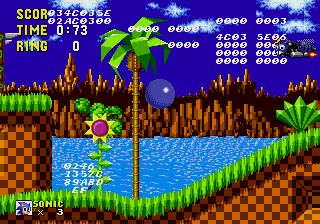 There isn't much to see with the opening demo gameplay because Sonic promptly gets annihilated by a Motobug. When the Motobugs and time limitations are removed, we're able to see this gameplay. The recording was made with an earlier level layout and isn't accurately depicted, but Sonic does several basic maneuvers going back and forth until about a minute and a half when the gameplay ends. To load, extend the time limit with FFF614:FFFF, and the Motobug object can be replaced at 0x867E with 8230 (or any other hidden object offset).

Resembles a rocket or something similar taking off. Replaced by the aforementioned Goal block sound effect. This sound is used with the unused warping object.

A duplicate of the "badnik destroyed" sound effect. Replaced by the air bubble sound.

Sounds like a buzzer of some sort. Replaced by the drowning sound effect.

A louder version of the waterfall found in Green Hill Zone. This and the next two were completely deleted in the final game.

A fiery noise that progressively oscillates. This and the previous two sounds don't end when playing in-game.

Slightly slower than the final track, and a couple of instruments towards the end are held for a bit too long. Goes unused in this build.