From The Cutting Room Floor
Jump to navigation Jump to search
This page is a translated version of the page Super Mario Bros. 3 and the translation is 2% complete.
Outdated translations are marked like this.
Other languages:
Deutsch • ‎English • ‎Nederlands • ‎español • ‎français • ‎português do Brasil • ‎русский • ‎中文（中国大陆）‎ • ‎日本語 • ‎한국어

There are some leftover debug routines in the game, but none can be accessed without cheat devices or hacking.

On the title screen: 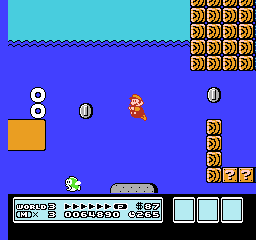