From The Cutting Room Floor
Jump to navigation Jump to search
This page is a translated version of the page Super Mario 64 (Nintendo 64) and the translation is 11% complete.
Outdated translations are marked like this.

The game is also notable for the sheer level to which it's been dissected by fans, to the point where 2020 saw the game get successfully decompiled by dataminers and unofficially ported to PCs. The same year, its partial original source code was leaked, leading to the discovery of early Luigi models and textures. L was real all along.

A Nintendo DS remake was released as a DS launch title in 2004, and a slightly updated version was released on the Nintendo Switch as part of the Super Mario 3D All-Stars collection on September 18th, 2020.

The names are from sm64/data/Anime/aaa in the leaked source code.

File Date: December 26, 1995 Animation #56. This unused animation appears to be Mario putting on his hat faster than normal.

File Date: August 25, 1995 Animation #81. This unused animation appears to be Mario transitioning from freefall to a forward spin appears to be an early triple jump according to the name.

File Date: December 26, 1995 Animation #84. According to the iQue build's source code, It would of been used when landing from a jump on a Koopa shell.

Animations #98, #99, #100. "Oshin" translates to "nausea". According to the source code, it would have been related to an environmental effect, possibly the gas in Hazy Maze Cave. An animation called OshinWalk also exists in the code.

Left: Animation #145. This is the normal sitting animation. Right: Animation #142. This unused animation appears to be Mario sitting motionless. It appears to be a duplicate of SlideEnd, but maybe to save on space? ...Perhaps this was the original sitting animation, before they decided to have Mario move his arms to make the animation more visually interesting when sliding. This animation can be seen in the Shoshinkai 1995 footage.

UJumping File Date: December 19, 1995 JumpBack File Date: August 23, 1995 Left: Animation #191. This is the normal sideflip animation. Right: Animation #73. According to the source code it would've been used for side flipping. 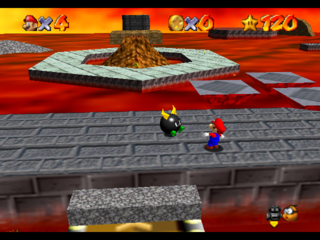 The bullies have an unused animation for kicking. A video showing this animation can be seen here. To view this in-game, replace the value in the extended US-version offset 0x882956 with 42A4. The internal name of this animation is called BackDown. 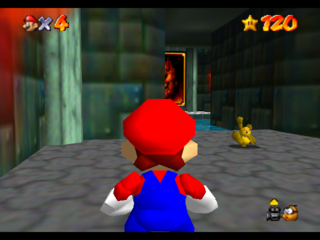 In an official strategy guide interview, producer/director Shigeru Miyamoto revealed that "Mario was able to throw the rabbit" at one point during development. There is an unused animation that appears to have MIPS bounce on the ground while recovering from a fall, likely a result from being thrown. A video showing this animation can be seen here.

To view this in-game, replace the value in the extended US-version offset 0xA4C1E1 with 013338. Interestingly code still exists for MIPS to trigger this if he was thrown. The only way to see this without hacks is if you use glitches to bring MIPS into the water-draining room.

This plant has an unused animation that is similar to the sleeping animation seen in footage from Nintendo Shoshinkai 1995. It features the plant showing its teeth as it sleeps, although differs from the Shoshinkai demo since Piranha Plant occasionally bobs its head like it is having a sleep reflex. The internal name of this animation is called sleep_tmp. A video showing this animation can be seen here. To view this in-game, replace the value at US-version offset 0x1D5DF9 with 01AAE4. 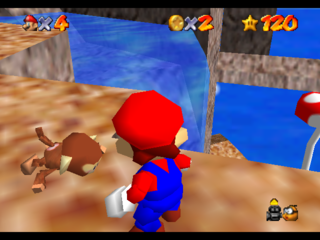 The monkey has an unused animation of falling or tackling. A video showing this animation can be seen here. To view this in-game, replace the value at US-version offset 0x15FDE0 with EACC to substitute the head-bobbing animation with this.

A blizzard can be triggered in a level via the "Enviroment Effect" option in Messiaen's program, OBJ Importer. It interacts with Mario in the same way as normal snowflakes do.

Located at the beginning of the game's text, in both the Japanese and localized versions of the game, is text for an early level select that was used by the playable demo of the game featured at Shoshinkai '95. It is not the same as the functional Level Select that remains in the final game. It was likely only made for the demo as the source code indicates that the final Level Select was finished before the Shoshinkai '95 Demo, the date being September 6th 1995, one month before the demo.

In the camera cutscene table, there is an entry that is never called and not associated with a level. Forcing this unfinished cutscene code to play seems to most appropriately fit with Shifting Sand Land, as it focuses correctly on the Pyramid Top object given its focal point coordinates.

The decompilation, and the iQue build's source code, reveal some code that appears to be leftover from when (Luigi) was intended to be in the game.

In several files in the code, a pointer to a second player struct appears right after the pointer to Mario's struct. Within the code for handling shadows, there exists a switch-case block with two cases, one of which sets a variable to the Mario struct and the other sets a variable to the aforementioned second player struct. In the leaked source code, Model ID 2, Is labelled as Luigi. The camera for locking it is labelled as 2P camera, which was mentioned in an interview that the fixed camera was intended for a Multiplayer Mode. A section of memory is labelled as Luigi Animations in the source code. However, in the final, the section is completely empty. Unused labels mention a third game mode, Game_Mode2P. Similarly, Player 2 can still control the camera to some extent.

Actor Groups consist of files in the game which contain model data for different objects. Each level has a set of actor groups assigned to it, and in a few cases none of the objects in a file they are assigned appear in the level.

The Princess's Secret Slide includes the actor group for the cap switch levels (group8 in the decomp). The group consists of the cap switch object and the unused springboard object, raising the possibility that one of these was to be included in the stage at some point.

Wing Mario Over the Rainbow includes actor group 2 consisting of Bully and Blargg as well as group17 consisting of several Hazy Maze Cave actors. No actors from either group are used in the final level.

Cool Cool Mountain includes actor group 16 consisting of Chill Bully and Moneybag even though neither are used in the level. 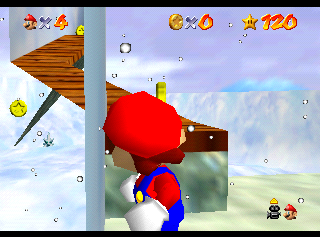 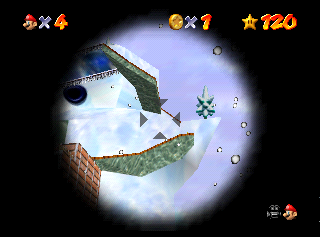 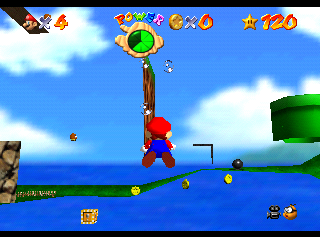 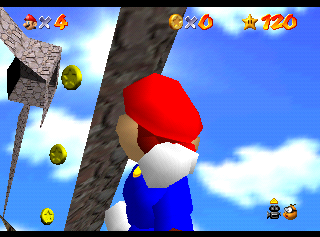 Although never possible by the normal game's standards, Mario can hang on the starting cloud of Wing Mario Over The Rainbow. This can only be hanged on if solid ground of any kind is present under this cloud, as shown at 1:06 in the video. This oddity still exists in Super Mario 64 DS. Also shown in this video are hangable ceilings that make no sense probably unchanged from an earlier build. 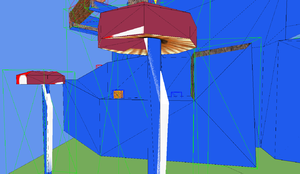 Tower Of The Wing Cap

The towers extend much further downward visually than their collision geometry. This theoretically means Mario can fly right through the towers at their bases.

The two spires at the back of the castle have no collision at all. This is easily noticeable in-game as the top of the tower (where Yoshi is) can be reached and walked around. 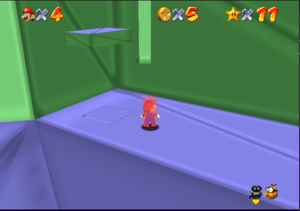 Near the top of the fortress is the remains of the ground collision that is used for the level's Piranha Plants. A Piranha Plant was likely isolated here at one point during development. Interestingly, Throwback Galaxy from Super Mario Galaxy 2 (a recreation of Whomp's Fortress) added a Piranha Plant near this spot.

The smoke texture displayed in-game is the result of a corrupted texture. The smoke texture is supposed to use the IA16 texture format, but instead uses the RGBA16 texture format. When viewed with color, this results in a glitchy-looking texture with random colors. Since the texture is displayed in-game without color the texture does not look out of place. If the IA16 format is used, the texture looks much more like actual smoke. Whether the corrupted texture went unnoticed or was intentionally kept is unknown. In the source code it is labelled as gas_b5, with a note saying that is a newer version. 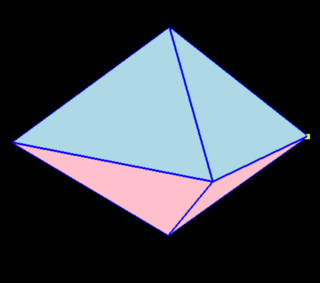 At 0x070184C8 in the Wet Dry World level data, an unused collision list for the Water Level Diamond object can be seen. However, the code for the object handles the hit detection in-code, so this list is not used.

The demo data can be found at the following ROM offsets:

The code for the fish behavior and switch cap behavior both contain checks for if the level the object is in matches the ID for an unused course, with the ID being that of the 32nd level in memory. In the fish behavior, if the condition is met the fish do not despawn even if the game detects no water at the fish's location. In the cap switch behavior, the condition makes the game bypass checking if the switch has been activated so that the switch is always unpressed. After the the gigaleak on July 25, 2020, the stage was found in the source code and is confirmed to be a test level. 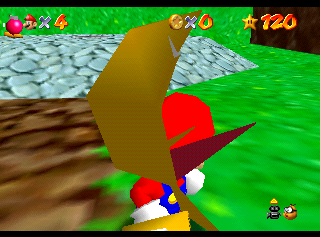 Koopa the Quick has a strange, red polygon in his head, which was most likely intended as the inside of his mouth due to the placement. This is unseen because Koopa the Quick never opens his mouth, even when he talks.